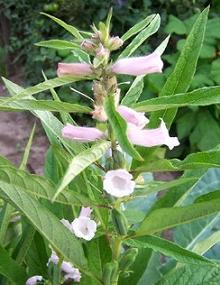 The oil is made of sesame seeds, it has a pleasant smell and taste of hazelnut flavor. In addition, unlike the seeds which perish if they are not dried sesame maintains its healthy properties for a long time.

Sesame oil practically does not become bitter because of its unique cold pressing technology used in its preparation. Thanks to such method of production, all the necessary and healthy elements are kept that are very well accepted by live cells, and they have antioxidant effect, slowing the aging of cells.

Sesame oil is a valuable dietary product, which favourably effects the health in case of lipid exchange disorders, hypertension, joint inflammation and degenerative diseases. In recent years, thanks to the fact that sesame seeds and oil is rich in calcium, phosphorus (bone tissue building materials), and phytoestrogens that control the bone-building processes, they are actively used in the prevention of osteoporosis.

•  to protect the skin from UF-rays

• to protect hair from sun, sea and chlorinated water

Attention! Using oil for therapeutic purposes, it is advisable to consult a specialist.

Sesame seeds – one of the oldest spices known to man. Consequently,  from many grasses and herbs forgoten today, sesame is mentioned in Erbess papyrus – in a 65 feet long bundle which contains ancient medicines and spices, and that is one of the oldest written evidences about useful plants. Avicenna also wrote about
the therapeutic properties of sesame in his medical works.

The popularity of sesame is also reflected in the Assyrian folklore. It was mentioned that the Gods drank sesame wine on the eve before the foundation of the World.

The tale Ali-Baba and 40 thieves contains a famous phrase, ‘Sesame, open!’ Right those miracle words Ali Baba and 40 thieves used to get into the cave. The magical phrase is explained by the fact that touching the matured sesame pod, it opens with a click.

It is known that the Babylonian citizens prepared sesame pies, wine and brandy, as well as used sesame oil for cooking.

Already in 1500 B.C. the Egyptians used sesame seeds and oil in medical preparations.

Sesame is associated with immortality. Here there is an exaggeration, but seeds are really rich in vitamins (especially vitamin E), minerals: zinc, which is necessary for normal functioning of the human body, phosphorus, calcium.

Everyone knows that milk products contain calcium, but only very few know that 100 grams of sesame seeds contain daily norm  of  calcium  for people after 30. It is doubtful whether it is possible to include these seeds in a natural way but they can be replaced with products added by sesame seeds. For example, sesame oil. That is correct, because the oil keeps all useful substances that sesame contains.

Medical Research statistics shows that the use of 1tablespoon of crude sesame oil per day increases the calcium content of the body 3 times.
Today, just as well as several centuries ago, to keep its soft seeds, sesame was collected by hands, and sesame and sesame oil is still considered as an indispensable ingredient of Japanese, Chinese, Indian and many other world cuisine.

All seeds contain some hidden forms of energy, which is used as a source  of the growth of new plant during the first phase of its life.

Sesame seeds contain phytosterols, sesamine, sesamolin, Е vitamins, fatty oil (60%), which is composed of the following acids: oleic, linoleic, palmitic, stearic, arachine and lignocerine (the majority of the acid is absolutely necessary  for the normal functioning of the human body, but they are not prepared independently, and we must regularly undertake  it with  food).

Under the Eastern medical terminology, sesame oil is “hot and spicy”;  in case of loss of the weight,  it lets grow the body flesh, in case of  obesity –  it strenghtens the  loss of weight of the body. It eliminates “cold” diseases, “inhibits the mucus and the wind.”

More recently Swedish researchers conducted a study where they found that for people who prefer natural preparations, sesame oil is a great agent to treat dry lining.